Raw Tuesday went down as planned, though not blogged, but I *am* on vacation and I needed to get that Daring Bakers post up yesterday, so here is this week’s installment of Raw Tuesdays on, well, Thursday!

Breakfast was yet another post-run green smoothie. I will take a picture of one of those things eventually (I should be able to since I drink one pretty much every morning!). My two most popular choices are 1) almond milk, a banana, a large, cored apple added to a blender of loosely-packed spinach or 2) a banana, a cup of fresh blueberries or strawberries, and apple juice or almond milk with spinach. Yum! Depending on how hard my morning run was or how busy I am, I sometimes find myself needing a snack mid-morning. I caved to my inner-consumer and did buy a few of these: 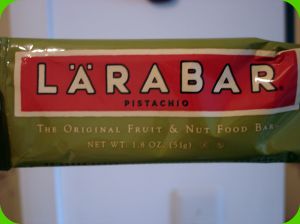 In my defense, I don’t have a food processor here, so I can’t make these, which are a billion times less expensive and just as yum! Often what I’ll do is have about a half a bar before a run and the other half as a 10ish snacky-poo.

For lunch we had the “Baja Cheeze Burrito with Taco Nut Meat and Red Pepper Corn Salsa” from Ani’s Raw Kitchen. We were “supposed” to eat them wrapped in cabbage leaves, but we used collards, because we’re punk rock like that. While I didn’t manage to remember to snap a pic at lunch, I did remember to take a picture of our dinner, which was our left-overs served over salad rather than as wrap :

This is a crappy picture, and I’m sorry, but if you look carefully you can see the globs of green Baja Cheeze, Nut Taco Meat Romaine boats sitting on the spinach, and the Red Pepper Corn Salsa piled on in the middle. We mostly liked this trio. The salsa was fun because corn cut fresh from the cob is always a good thing, and the Baja Cheeze was very yummy, but a little rich. We really liked the Taco Nut Meat, but found ourselves mixing it with extra tomatoes and spinach to lighten it up a little. There is a very similar taco meat recipe to the one we used here over at Jen’s Fuel section (and while you’re there, check out her many other offerings!).

After lunch we made up a batch of “Cashew Coconut Pudding” to snack on with some fruit :

We made up a big fruit salad with watermelon, blueberries, bananas and gogi berries and served it up with the pudding. The pudding recipe made a huge amount, and we were able to snack on it for a few days, which is always a good thing. It’s really just cashews, water, dates & shredded coconut all whirled together, but it’s yummy!

What we’ve noticed as we’re trying to eat more and more raw meals and snacks is that it does require a bit of planning, but also how expensive the nuts and dried fruits are. I know that we’re in the midst of a global food crisis and that food prices have gone up as much as 85% on certain items, but I was surprised to see foods here in the U.S. nearly as expensive as in Europe!

Now for a little question : What is your favourite Raw Foods book? I am hoping to buy one more Raw foods book before I leave for home, and would love some suggestions! The only thing is I don’t have a dehydrator, so a book that’s reliant on dehydrators won’t really work for me. I would love some feedback, so feel free to leave a comment or email me!