If you took a peek at last week’s Les Vendredis Francophones then you saw this delicious chocolate cake I made for my mother-in-law’s birthday last week.  This is one of those cakes that will give your guests the impression that you’re a master pastry chef, and it is so crazy-easy that you’ll find yourself making it again and again.  I know that vegan cakes can sometimes run on the “heavy” side, but this one has a light, tight crumb that will leave people doubting it’s really vegan…

After a little trial and a bit of error, I bring you this low-fat delight with but a mere 40g (about 3 tbsp) of butter – apple sauce replacing the initial 3/4 cups the original artery-clogging recipe called for.  Tasty and modest in the fat department?  Who would have thought?

Serve this rich chocolate cake with a cup of espresso, or with your favourite non-dairy ice cream for extra-special birthday (or any day) fun!

2) Using an electric mixer, beat the Ener-G and water until frothy, then add the butter and sugar and continue mixing for about 5 minutes.  Next, add the soy milk and apple sauce and blend until smooth.

3) Sift in the cocoa powder, corn starch, flour and baking powder, and blend with a wooden spoon until “just mixed”.  If you stir too much you’ll have a chewy cake, and that would be sad.

4) Pour the batter into the prepared pan and bake for about 35 minutes, or until a toothpick comes out clean.  Let the cake cool in the pan for about 10 or 15 minutes, then gently reverse it onto a cooling rack.

5 ) This cake is quite lovely naked, but you could of course get fancy-pants with some chocolate ganache or lemony powdered sugar icing...and don’t forget the sprinkles!

Blogging began for me as a way to flex my activist muscles and say what I wanted to say about social justice (and injustice), feminism and veganism (aren’t they all intertwined?  Obviously!).  I was looking not only to make my voice heard, but also to find other voices out there in the dark, who shared the same ideals and values that I held close to my heart.  And in the case of veganism, to my tummy.

Community.  What I found was that in a very short time after I began blogging, there was this amazing, joyful, enthusiastic group of vegan bloggers who had so much to share with the world, and prove time and again to be the most generous folks I’ve ever met.  People who started out as casual commentors on my blog have become genuine friends – people who I email and tweet with and  who know more about my “real life” than my family!  These friendships have gotten me through some terribly tough times, and have also celebrated with me when things were going great.

One the bloggers I consider a real friend is Mihl of Seitan is My Motor, and when she mentioned considering visiting the south of France it was obvious that she and P. would  come stay with us.  Like an exteno-meet-up that lasted several days!

It’s funny, because when we were all hanging out – be it at breakfast over coffee or when discussing the world after dinner – it felt like Mihl and I had been friends for ages and were simply catching up, not really getting to know one another.  We were having so much fun, we actually made them stay an extra day!  Guppy wanted to keep them hostage in the bat cave (aka the spare bedroom where M. Fish hides out attacking virtual zombies) forever, but we’ll content ourselves with another visit!

Ms. Mihl doesn’t make much to-do about her birthday, and so she was very surprised I’d remembered it was her special day just before her visit.  Guppy and I just made a simple chocolate birthday cake from my grandma Mary’s cookbook (more on this soon).  It’s a “war cake” or “crazy cake”, a naturally vegan chocolate cake.  I promised her the recipe, and I don’t think Grandma Mary would mind if I shared it with you!

In a large bowl, stir the flour, sugar, salt, baking soda, and cocoa powder in a bowl until thoroughly combined.  Make a well in the middle and add the rest of the ingredients.  Mix until just combined with a wooden spoon (well, any spoon, but I use wooden. meh.) and pour into the prepared pan.  Bake for about 30mins, or until a tooth pick inserted in the centre comes clean.

When it’s ready, carefully remove the cake from the pan and let it cool upside down on a wire cooling rack (if it sticks to the pan, just run a knife along the edges to loosen).  Let cool completely before frosting.

Pour the sugar into a bowl.  Add the lemon juice and extract and stir vigorously with a fork until it becomes smooth.  If it’s not thin enough, just add some non-dairy milk (I use soy), a teaspoon at a time, until you’ve reached desired consistency.  Carefully spread onto cake.  If you’re getting crumbs in your frosting, just add a very thin layer of the icing, don’t worry, put it in the fridge to harden a little.  Then just frost over the frosting layer.  See? All better!

Surprisingly, we two passionate food bloggers didn’t take much in the way of pictures.  I think we were too busy talking!  Go figure.  Mihl does have a snap shot over at her blog today, so go see!  Next time I make this cake I promise to update with a photo.

What I did take pictures of are some of the goodies she brought me from Dresden! 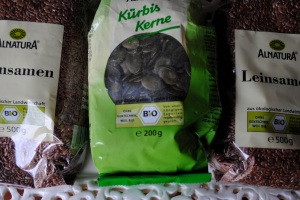 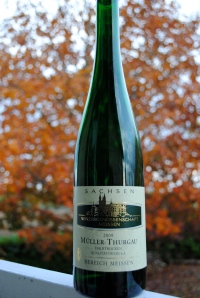 Speculos cookies, pumpkin & flax seeds (which I’m having trouble finding since the move) and wine!  Wee!  Guess that’s why we forgot to take pictures of our food!  She also brought me chocolate and jam, but that is for another post…