Many years ago,  when I was still a young woman living in the U.S., I came to Paris for the summer to dance, study French and soak up all the Parisian magic I could. I met a friend-of-a-friend during that visit, a bright young woman, a-typically tall  for a française.  She towered over “rather short for an American” me, and our seeming differences drew us together.  My recently coloured raven hair reached long down my back in straight locks, and her short curly blonde hair stopped at her ears.  She’d been in a serious relationship with her boyfriend for nearly 8 years, while I often found that 8 days was more than long enough as far as romantic entanglement was concerned.

While we both thought Philippe Djian rather sexist, we still found ourselves drawn to his prose.  Though we really enjoyed Krzysztof Kieślowski‘s Three Colours Trilogy, we were both rather disappointed it hadn’t featured more Polish actors. Our disdain for Capitalism was mutual.  We became fast friends, and continued to email throughout the  school year.

When the opportunity for me to dance again with my favourite Parisian Prof. presented itself, she offered me her couch.  Her fiancée would be a continent away, finishing up research for his thesis, and I would make good company. Though we were both really busy that summer, we nearly always had dinner together, and that meant she would cook for me since my culinary abilities were boiling water and buying take-out.

That summer I learned the expression “au pif” literally “by the nose”,  in English we say “by ear”.  Most of what she created in the kitchen was “au pif” and I never once saw her consult a recipe. She showed me how to make this easy and delicious cold salad, and also how to cut tomatoes in my hand, thus not dirtying a cutting board needlessly. This was one of the first things I ever  learned to make.

This is one of those recipes that you feel guilty about posting because it’s so ridiculously easy, it’s almost a cheat.  On the other hand, it’s such a great recipe because it’s so easy it would be wrong not to share it.  Nutritious deliciousness has never been quite so simple and inexpensive.

I’d like to warn purists that this is in no way being touted as a traditional safsouf so before you get your pita in a pinch, just roll with it, please. 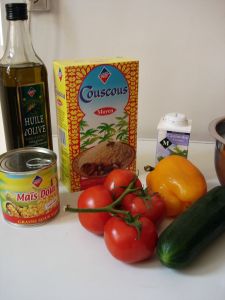 This recipe is wonderfully adaptable; you can add or subtract pretty much anything.  There are also no real set quantities because it’s a customisable recipe.  Here is the basic recipe :

* tomatoes I usually use about 3 or 4 medium ones.

*cucumber Cut in half length-wise, then in thirds, then hold it all in your hand like a bouquet and cut across width-wise over the bowl, ending up with six chunks.

* corn Fresh or frozen are of course best, but as you can see, last week I used canned! Oh the horror!  Just remember to rinse off the salt if you go canned.

* Tons of fresh or frozen parsley and cilantro or just one, or neither.

You’ll need a bowl, the size depending on how much you’re planning on making. I generally use a small mixing bowl. Go with a larger bowl than you think you’ll need, it’s better than having things over-flow, and you’ll need room for stirring.

1) Pour the uncooked couscous into your bowl. I’ve never measured this, but I’m guessing it’s about a cup and a half.  Or a cup. Sorry.

2) Now add your veggies and herbs. The key is to do your chopping/slicing over the bowl so the juices of the veggies fall in.  If this seems way to strange or dangerous to you, just use a chopping board, but be sure to add the juices with the veggies.

3) Add the olive oil. Again, I have no idea how much, because this is all by ear.  I usually just slosh a little in (perhaps a quarter cup total?).  You’ll have a chance to add more later on, so don’t worry about that too much.

4) Now it’s time to stir!  Using a large spoon, stir everything until it’s mixed through, then put it in the fridge and forget about it for at least 2 hours.  I will often make this in the morning before going to work, and re-stir just before serving at dinner.  The couscous will be perfect as it absorbs the juices of the veg you’ve added.  The second stir is also when you can add the salt to taste, and add a little more oilve oil if it seems lacking.

This keeps well in a sealed container for about 4 or 5 days I’d guess, but we usually it all in less than 2.  I also tend to vary the ingredients depending on if it’s going to be served to children or adults.