The instant I saw “Flourless Chocolate Cake” on this month’s challenge post, I knew I wanted to make this challenge Raw – as in raw cuisine. There have been other challenges where I could have really stretched things to allow for a raw interpretation, un peu tiré par les cheveux, as we would say in French, but this challenge just lent itself naturally to a vegan/raw possibility. 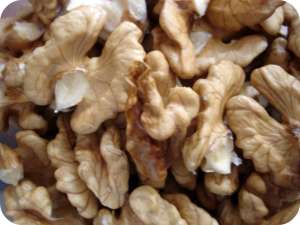 I also knew right away which recipe I’d be using : the Flourless Chocolate Cake recipe from Jennifer Cornbleet’s Raw Food Made Easy. If you’ve ever been curious about raw cuisine, but haven’t been sure where to start, I strongly recommend this book. Unlike many popular raw foods chefs, Cornbleet offers a comprehensive collection of recipes requiring only the most basic kitchen equipment, and she forgoes the seemingly requisite list of exotic ingredients so many other raw foods chefs refer to as kitchen staples.

This is a great recipe and I’ve blogged about it before, but I haven’t made it for a while. In fact, I’ve all but stopped concentrating on raw cuisine since my accident back in November. Please don’t misunderstand, I’m still eating crudités, raw fruit, salads, etc., but my weekly Raw Thursdays (and Tuesdays) stopped when I broke my foot. Partially because Monsieur Fish was doing most of the food prep and raw  doesn’t interest him, and also because food prices have made buying nuts and dried fruits nearly impossible for us. I’m hoping to prepare more raw meals in the near future, and I thought February’s challenge would be a wonderful opportunity to showcase a raw dessert, especially for those of you who maybe haven’t tried one yet.

This is the first time I used cocoa powder rather than carob for this cake, and I used a generous half a cup rather than a third. It came out very fudgy and tasting like a tourte or as my husband said “cake batter, but in a good way”. A friend of mine has a small farm in a near-by village, and she recently gifted me two big bags of organic walnuts. What a treat – perfect for this recipe!

We were also supposed to make an ice cream component, and I opted to take a spin on Mark Bittman’s sorbet formula. I’ve used this basic recipe to make sorbets before – it’s really easy, fast and delicious. I wanted to try to keep it “white”ish because we were supposed to make vanilla ice cream, so I decided to honor the spirit of the challenge by maintaining the colour, though I did take a few liberties with the flavour. This could easily be made 100% raw by omitting the vanilla or by using some scraped vanilla beans. Humm, vanilla.

Once everything is well frozen, at least 8 hours, just pop it in your food processor. I processed the pineapple chunks first, then added the coconut milk and vanilla. When it’s nice and blended, you can either quickly eat (it’s very melty), or put it back in the deep freezer for a few hours, then re-process just before serving. I like this method because it’s nice and scoop-able.

The paring of this flourless cake and the piña colada sorbet was just heavenly! When I was a kid, I would always try to let the ice cream melt a little and mix it up with my cake. I was that kind of kid. That’s exactly what this reminded me of – so delicious!

I’d like to thank Wendy of A Charmed Life and Dharm of Dad – Baker & Chef for hosting our challenge. Do be sure to check out all the other Daring Bakers creations!