After being a bit over-zealous in the furniture-lifting department I hurt my traps last week, which meant not much blogging, knitting or much of any activity.  They are feeling better now, though, which is good, because as you’ve noticed I’m out of pre-written posts – I’m blogging by the seat of my pants! 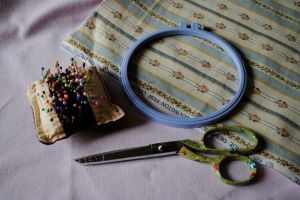 Some of you might be wondering what a doudou is.  In French, a doudou is an object of substitution children use to feel secure when apart from their parents : a blankie, stuffed animal, dolly, etc.  I’m pretty sure you’ve worked out “napkin” for yourselves.

The French school day is a bit longer than in many other countries :  5-year-old Guppy’s classes begin at 9 a.m., she has a two-hour lunch break from noon to 2 p.m., then classes until 5 p.m.  (Some children stay at the after-school programme /day care, making it an even-longer affair).  Though it hasn’t always been the case, I’ve been able to fetch Guppy and she’s had lunch at home with us since September, which she loves.  It’s much calmer, and she gets to read or play in her room (or snuggle her mamafish).

This is going to change, however, and she’s going to be eating once a week at la canteen or school cafeteria, much to her chagrin.  Her response to the announcement was, “but Mumma, I love you too much – that’s too many hours!”.   There’s no way around it, however, even if it’s hard to see your kiddo in distress.

So what do you do?

You make a doudou!

But shhhh!  It’s a secret doudou, don’t tell anyone!

The children bring a cloth napkin on the days they eat at the cafeteria, so I’m getting all Jamie Bond and making her what appears to be a napkin, but in reality, it is a secret, soft and reassuring doudou.

I’ve embroidered her name, and she picked out a few designs she wanted to  use to embellish it.  The above poodle is from the Stitch-it-Kit which has lots of cute retro designs I never use, but because I wanted to empower the Gup I handed her the box of transfers and let her pick out what she wanted (so glad she didn’t go with the hula girl).

The napkin will be made of two layers of fabric : a cotton twill, functional but cute (it has flowers on it, she picked it out) and the other side (the doudou side) is soft pink flannel I cut from one of her receiving blankets.  I assured her I would put lots of extra love between the two layers so that if she starts to have a gros chagrin (wave of sadness) she can give it a squeeze and she’ll feel better (I strongly suggest adding extra love if you’re trying this at home.  A little love is good, but not potent enough).

I just started it last night, so I haven’t finished yet, but I’ll show you next week…if you promise to keep this under wraps!  We don’t want any unnecessary teasing at school now, do we?

Do you have any new W.I.P.s in the works? We would love to see what you’re up to! Snap a shot of your  “in progress” masterpiece and add it to the  W.I.P. Wednesday Flickr Pool. Whatever your works-in-progress, have a crafty week, and don’t forget to see what the other Wipsters are working on.