Edited to add : I have no idea what is happening with my blog – evidently Reader somehow snagged a group of old posts from 2 years ago.  This is the real MoFo Post!

Erm…who else still has their Halloween decorations up?  Please tell me I’m not the only one.

So is this year’s Vegan MoFo amazing or what?  We’ve got over 700 bloggers playing the MoFo game – amazing stuff, kids.  It’s got me feeling inspired, I tell you!  Inspired and excited.  And generous!  I bet that got your attention, eh?

Because Vegan MoFo is about vegan food, and food is all about tasting, I’m going to be doing a few Frenchy product reviews, and I’ll be giving a way a few (little) products for you kids at home to try.  Sound good?  Well then, just tune in the next three Fridays : November 12th, 19th and 26th for your chance to win a little somthin’ somethin’ – even if you live in the U.S.! Or Australia! Or Japan!  World-wide love, kids, that’s what the Shellyfish is all about.

And speaking of inspiration, how about an interview with a new vegan?  I’m very excited about it, and I can’t wait to share it with you!  I know many of you are “pre-gans” and are “vegan-curious”, but are afraid of giving up your cheese.  It’s never too late to go vegan!  Stay tuned!

There will also be more recipes coming your way : peanut butter cup cookies, Hazelnut Chocolate Spread (like Nutella, but vegan and way better), Cassoulet avec vegan saucisess de Toulouse, perogies, Mihl’s birthday cake, and who knows what else?  Not me!

Because I cannot do a MoFo post without some foodyness, I give you our Rainbow Warrior Zombie Cookies we made for Halloween.  They be pink, and they be proud.  And delicious.  They are of course a Halloween (and Vegan MoFo)  tradition!

Unless you’ve been living under a rock, you’ve probably heard the exciting news…my friend Ricki who blogs at Diet, Dessert and Dogs wrote a smashing book of vegan sweets called Sweet Freedom and the waiting is over!

Last Autumn a very lucky group of foodbloggers and Ricki’s friends were able to test the recipes in this book and it was indeed a privilege to get a sneak peek at everything that Sweet Freedom has to offer. Using all natural ingredients and avoiding so many of the processed sweets that traditional desserts rely so heavily on, Sweet Freedom gives you all the goodness, without the “junk”. Here’s the book description from Ricki’s blog:

Ideal for anyone with dietary restrictions because of allergies or food sensitivities, for kids whose diets must be free of additives, chemicals or any other artificial ingredients; for vegans; and for anyone following a kosher diet (everything is parve). Sweet Freedom’s recipes are all lactose free, casein free, low gluten or gluten-free (about 25% of the total are entirely gluten free) and refined-sugar free.

I was able to “virtually” sit down with Ricki and ask her a few questions about her thoughts on Sweet Freedom. It’s not every day that I get to interview a famous, internationally-known cookbook writer, so I’m still feeling pretty special.

1. Do you have a favorite “alternative” ingredient for your baking? You know, one that most home bakers have never heard of – or wouldn’t think to use?

I’d have to say that my (current) favorite ingredient is agave nectar. It’s gaining popularity, especially since it’s low glycemic and suitable for Type II diabetics, but many people still don’t know about its charms. Agave is sweeter than sugar or even honey, it has a milder flavor than honey (so it won’t overpower subtle flavors in baking, like lemon or vanilla) and it never crystallizes the way honey does—a real plus for me. I love the flavor and texture it confers to baked goods and non-cakey desserts like the Spiced Millet Pudding in the book.

2. Of all the recipes in SF, which one is your “go to” recipe when you need to make a tasty treat in a hurry?

Of course, my mind always goes to chocolate—so my most-baked recipe in the book is probably the Chocolate Mint Chocolate Chip Cookies. However, there are actually other recipes that are even quicker and easier, such as the Easiest Almond Cookies or the Orange Tea Cakes. Hmmm. . . I guess I like them all!

3. What led you to write Sweet Freedom?

The reason I wrote the book was twofold. First, I began to bake this way because of my own dietary issues, and was so happy with the results that I wanted to share. I already had a huge collection of recipes from my baking company, Bake It Healthy, so all I had to do with those was convert them for the home baker. But it wasn’t until Bake It Healthy closed and customers still kept asking me if I’d bake a birthday cake for them, or supply treats for a baby shower or anniversary party, even though I wasn’t technically doing catering any more, that I realized there was a real need for this type of recipe. I wanted all those people to be able to reproduce the desserts in their own homes.

4. If you were a dessert, what would you be and why?

That’s a tough one! Whatever it is, it will have to be yeast-free (and probably chocolate) 😉

5. When did you first start eating vegan? What were your motivations?

I became a vegetarian as an undergraduate living in residence. It was partially chance and partially personal preference. Having been raised by a father who was a butcher, I was fed meat at home almost every day. However, because of his occupation, my father was also quick to let my sisters and me know (whether true or not) that any meat we ever ate in restaurants or cafeterias was of the absolute worst quality (in fact, my family almost never ate in restaurants for that reason). When I saw the first “mystery meat” in the school cafeteria, I knew I couldn’t eat it. I have also naturally gravitated toward vegan food—I’ve honestly never tasted anything vegan that I didn’t like, but there were plenty of non-vegan foods I didn’t like. It was a natural progression. Then, when I was treated by a naturopath years later, she vetoed dairy and eggs for the first phase of my diet. Eventually, that just felt natural—and I felt so much better physically that I just continued to eat that way. So I guess my motivations were connected to improving my health—and eating food that tasted good to me! 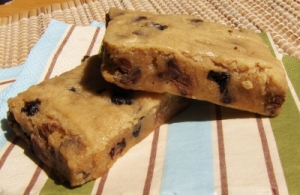 6. Is there a common cliché or stereotype you’d like to dispel concerning “healthier” baking and desserts?

When I used to sell my baked goods in health food stores, sometimes I’d do demos where I stood at a table with plates of my desserts and offered them to customers passing by. At first, I’d ask, “Would you like to try some healthy desserts?” The answer I got most often was, “Healthy?? NO WAY!” as if I were proffering lead-based paint to eat. For some reason, the general public still believes that “healthy” equals “tasteless.” After a while, I’d simply say, “Would you like to try a brownie?” or “Would you like to try a chocolate chip cookie?” Inevitably, once they tasted the baked goods, they were sold.

7. After so many years as a conventional baker, how did you manage the transition, and how difficult was it?

Learning to bake all my favorite desserts without the usual all-purpose wheat flour, eggs, butter, or milk was a huge challenge at first. I went through a lot of experimentation and many, many flops. But once I got a feel for the “new” ingredients, I was able to convert pretty much any of my older recipes (there’s a chapter in the book devoted to ingredients and conversions). After that, it was a natural step to begin creating my own, original, recipes. 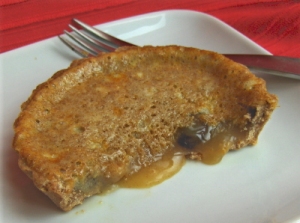 8. How do you know what substitutions to use in alternative baking?

I began by checking the types of substitutions used by other vegan bakers, whom I consider the experts in replacing eggs and dairy in baking. Once you know the basics, you can apply them to almost any recipe. I’ve discovered a few new ones along the way (avocado as an egg substitute, for instance). Nowadays, I don’t think of those ingredients as “substitutes” for something else any more, but rather as integral elements of each baked good in their own right.

9. Which recipe was tested the most?

By far, the gluten-free, soy-free, sugar-free whipped cream is the most-tested recipe; I went through at least 60 attempts before I hit on the one I liked. I had a version on my blog that worked, but was really, really time-consuming and fussy. I streamlined the process for the cookbook and created something almost identical to the blog version with less time and effort. So far, it’s always been a hit with anyone who tries it, whether or not they normally eat dairy.

10. Are your desserts low-fat?

While many of the desserts would be considered low-fat, that is not the aim of Sweet Freedom. My goal was to create healthier desserts that contained real, whole, unprocessed and all-natural ingredients. Without eggs, dairy or refined sugar, they are also lower in allergens than most desserts out there. As a result, the desserts in Sweet Freedom actually provide healthy nutrition as well as great taste.

Thanks so much Ricki for taking a few moments to hang out at the Fishbowl! I’m sure you’re just biting at the bit for your very own copy of Sweet Freedom – and I can’t blame you! So where can you get your very own copy? Just click here to order.