These doughnuts are great because they are calorie free, fat free…well, you can’t really eat them. They would make a fun little holiday gift for little (or not so little) ones.  I’ve finally put together a How To page, with lots of tutorials and fun things to make and do.  Go check it out! 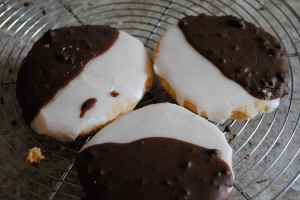 These are the chocolate crinkle cookies and the black and whites from Vegan Cookies Invade Your Cookie Jar.  Making these I had lots of help from Guppy and her friend who took turns rolling the cookies in the powdered sugar.  The recipe calls for corn syrup to help the cookies to spread.  Corn syrup is easy to find in North America, but not here.  I used golden syrup since it’s easier to find, but they didn’t spread as much as I’d have liked.  I think I have an idea for next time, and I’ll let you know if it works.  Taste-wise they were delicious, and Guppy brought some to her teacher who asked for the recipe.  I’d never heard of crinkle cookies before but I am so glad I gave them a try.

The black and whites were nothing like the black and whites I’ve had from the Jewish bakeries in Paris, but they were still very yummy.  Normally they are more crispy, but these were very cake-like.  Guppy and friend helped with the icing, which explains the lumps, but they had so much fun frosting them who really cares about aesthetics…

I’m sure you’ll be seeing other cookies from VCIYCJ as we get closer to the holidays!

I know what you’re thinking : With a title like that, there’s got to be a catch. You’re right.

I’d been wracking my little brain (ouch!), trying to think of something to make for my Pay It Forward (PIF) winners. It’s not easy knowing what to send someone you know without really knowing them outside of their blog lives. I considered making handbags, but not knowing their individual tastes, didn’t want to send something in their least favourite colour, or something that would sit in a closet forever. The only real criteria for the PIF gifts were that they be vegan and handmade.

Enter the donuts! As I was thinking of goodies to add to their parcels, I thought of making a treat to send, but was concerned that even though they weren’t leaving the European Union, cookies could be crushed or frosting smudged, etc. by they time they arrived at destination. I’d made some felt food for Guppy to play with, and while she was setting up a little tea party for us one day, I thought felt donuts would be the ticket! 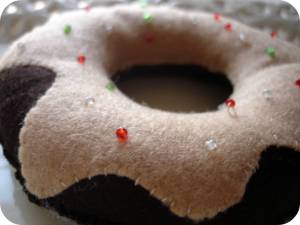 Please do note that this felt is indeed vegan : made with post-consumer recycled plastic bottles, we’re cruelty-free and lessening the environmental impact by using a recycled medium. Woot!

Would you like to make some donuts? It’s really very easy, though it is a little more time consuming if you stitch your “sprinkles” on. I set this up assembly-line style and it was a fun little project. I can hardly take credit for these – felt food has been around since I was little (Regan child. No, ketchup is not a vegetable. Shudder), and I’ve seen felt donuts in felt food packs for kids, on the net, etc. If you do decide to use this tutorial to make donuts that you’ll be selling, please remember me when you’re rich and famous!

Let’s begin! First you’ll need some felt. I chose two colours of brown for the “cake” part – so we have regular and chocolate flavours, and some assorted colours for your glazes :

Thread, pins, beads for your “sprinkles”, something to trace your donut shape (I used a CD, a canning lid or something similar would obviously work, too, but would indeed be less musical), a needle, an exacto-knife or rolling cutter, scissors and maybe even a self-healing mat if you have one (a clean cutting board works ok, too).

First : Trace your basic donut shape in the darker felt. Don’t forget, you’ll need two pieces per pastry. I made a dozen, so that meant 24 pieces (my math skillz are amazing, n’est-ce pas?).

You can use a spool to trace the outline of the centre. Don’t worry too much about this if your circle isn’t perfect -it’s going to look beautiful once it’s sewn up. Do try to cut two at a time, though, makes matching them up later a wee bit easier.

Now : (night was falling, so sorry for the flashy-blek.) 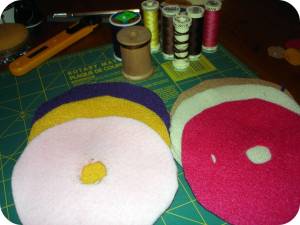 Whip out that CD again and trace your glaze colours. You can be traditional or get crazy – these are your donuts and they are your art!

Ensuite : (which means next, but I already said that above)

You’ll want to cut along the outer edge of your glazes to give them a drippy look. I just weaved in and out with my scissors. Again, if it looks funky don’t worry – it’ll be sweet as can be once it’s all stitched together.

You can proceed a number of different ways – I tried doing things in different orders because I’m curious like that – but this is the order that I found worked best pour moi. Begin by sewing the outer edge of your glaze to the top layer of your donut. Try to centre the glaze on the donut, and if the holes don’t perfectly match up it’s ok, you can trim them to match in the next step. It’s more important that your glaze is centered over the donut right now.

You might want to pin the glaze on before doing this to keep it in place, or maybe you’re a renegade and you scoff at my idées bourgeoises – best translated as playing square or safe. Anyway, you can whip stitch (I did) or straight stitch this part. Youtube has great videos to show you what that means if you don’t know. I didn’t know a year ago, so don’t worry, it’s cool. You’re cool. I said so.

It’s time to stitch all three layers together via the centre. If the three holes don’t match up well (ahem, at all), fear not. You can trim them to fit, just don’t cut too far into your donut or you’ll end up with an onion ring, which is tasty, but not what we’re going for here (but what a great idea! And fries, too! Yes!). Be sure and sew through all three layers using a nice, tight whip stitch.

If you’re stitching looks like your 3-year-old did it (see above) don’t worry a bit! It’s going to look just lovely when it’s stuffed. Promise!

What’s a donut without sprinkles? A naked donut, and I’ll have no nudity on this blog! I used beads, however, if you’re planning on making these for small children, animals, or batty adults, you may want to consider just using embroidery to embellish. Do that now, because the layers are open and it’ll be easier. Let me know when you’re done.

I had a picture of this, but it was terrible, so it didn’t make the cut. You don’t really need one, though. Just try to match up the outer edges of your donut, and whip stitch them together, leaving a small hole so you can stuff it with polyfill. I used a chopstick (see Katie, I can use chopsticks, too!) to push the polyfill around. If your edges don’t perfectly match up, it’s really ok, just slide them forward or back so that they do – once you’ve added the stuffing you won’t be able to tell. 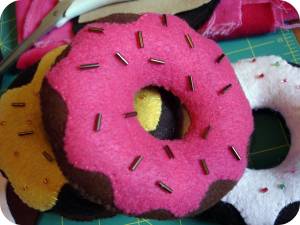 See how easy that was? And fun, too! Now go make a guilt-free dozen!

Don’t forget to see what the other Wipsters are up to, and to check out our W.I.P. Wednesday Flickr Pool, too.

I’ve received some most excellent Happy Mail in the past two weeks and I will be posting about it soon! I’m totally behind, but please super-cool sender-people, don’t think your mail didn’t rock my socks – my next post is all about you!