Have you ever noticed the sometimes bizarre feeling of ‘oneness’ out there in our little universe? For example, you look for a VW Bug as you cruise through town, and then you notice them all over.

There suddenly seems to be many more Bugs than you had imagined.

Huh… (imagine Twilight Zone theme music here) if they were to organize, I mean, communicate amongst themselves and, I don’t know, find a strong leader they could car-rally behind, well, yikes! they could take over the roads, the planet even! Dum-dah-dum-dum…

I began having this eerie feeling about a week ago. I felt a hankerin’ for a veggie/soy burger, with mustard and pickles and onions and homemade ketchup- the works! We have grain/soy/veg-type patties that can be purchased here in my little French village, but they sure aren’t cheap, and let’s face it, pre-packaged vegan foods (like all prepared foods) are often health food’s version of junk food with lots of things rather difficult to pronounce on the ingredient list. Homemade is better, but I sheepishly admit to you that while I have tempted many a recipe, I had never made Meatless-Macs myself.

Since I was in the mood for some veggie burger goodness, I was probably more aware of all the veggie burgerness out there, but still, it seems to be everywhere lately. I went to visit One Frugal Foodie for the first time, and she not only has a fab blog, but also has a mouth-watering picture and recipe to propose. While zipping around Susan V’s excellent choice of veggie burger recipes at Fat Free Vegan I oogled her Veggie-Oat Burger (among other choices!), even this week’s Meatout Mondays recipe is entited “Nuts about Burgers”! (If your’re not familiar with the Meatout campaign, a branch of FARM- the Farm Animal Reform Movement, you should check out all the good stuff they do, and sign up for their weekly newsletter Meatout Monday’s). Giving in to the obvious galactic command, I realized that “Resistance is Futile” and began flipping through my cook books to see what I could chose from. Difficult to decide, but in the end the winners were the “Soyburgers” from the perennial classic The New Farm Vegetarian Cookbook which is just so killer-great (both the book and the burgers).

The New Farm recipe won out because it seemed the fastest and easiest among my cook book recipe contenders. Soybeans, oat-flakes, spices, onion, optional pepper (we chose red), etc. Nothing too crazy, but oh-so good. I amped up the spices adding cumin and lots of garlic powder, and also added a little wheat germ to the mix and rolled the pre-patties in germ to make them easier to handle. The soy mixture was delicious even before being fried up- tasted like a bean dip- and the Guppy & I enjoyed dipping apple slices in the little bit that was left in the mixing bowl. 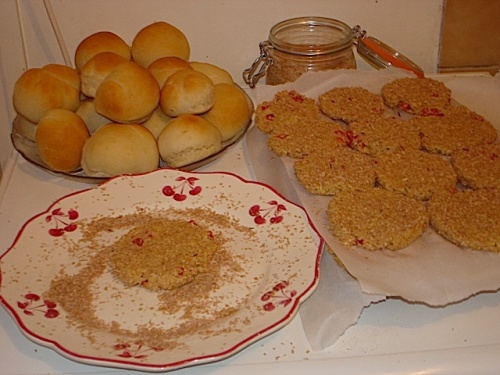 We couldn’t put such delicious burgers on just anything, we needed the most delicious buns ever, and boy did we find the recipe for the job! Once again, The New Farm in hand, the Guppy and I whipped up some “Soft Sandwhich Buns” that were, honestly, the best roll-biscuit-bun thing I’ve ever baked up. A bit of minimal waiting (a total of 40 minutes from beginning to end before putting them in the oven for a mere 20 minutes) these buns were delightful.

Much to my dismay the Guppy poured in some extra sugar as we were mixing the ingredients- a couple of teaspoons maybe- but it turned out to be just enough so that when former fast-food junkie Mr. Fish tasted one he gave me what was possibly the kindest of comments he could have conjured up, “This is better than Macdo!”. Merci, mon amour.