Pardon the title, seems I’ve gotten really punny in English lately, I’m not sure what that’s all about.  Probably because since I’m not currently teaching*, the only English language use I seem to be getting is little blurbs on Twitter and of course chatting up my now 6 year-old (Gasp!).

Though I’m not Catholic, every year I give something up for Lent in memory of my dear, sweet Grams.  This year I decided to give up baking (as I have the past few years), but also, coffee.  Though my consumption habits have waned considerably in the past few years, I was still drinking a very strong “café italien” every morning, and often one after lunch.  I thought it was the time to give that up for a little while, since I was finding myself needing the coffee, rather than enjoying it.

Before my Lenten baking-fast, however, I did give this cake a trial-run : 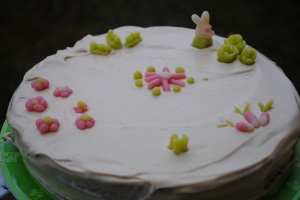 The cake, my go-to carrot cake recipe from 500 Vegan Recipes, was gussied up with some almond paste and a little creativity. 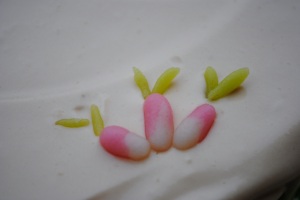 the only radishes my family will eat… 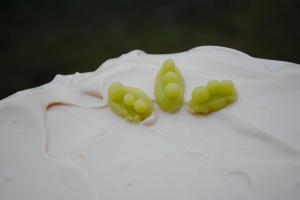 give peas a chance! 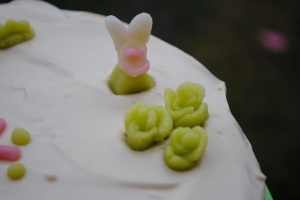 I suppose you could do the same thing with fondant, but since my local grocery store has all natural almond paste in green, pink  and white, and they are natural colours, I opted for that.  I’d seen the idea for the sculpted veggies in Marie Clare Idées, I think the February issue, but I don’t remember.

This cute cake was supposed to be my last baked treat for 50 days, but I went and volunteered to bake treats for Guppy’s school bake sale.  They asked for cookies,  and of course because as the only person around who has actually eaten an authentic chocolate chip cookie I was urged to make chocolate chippers. Figures. 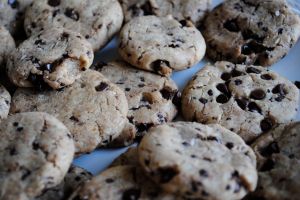 They turned out a little less-than-authentic because while not paying attention to what I was purchasing I bought a bag of chocolate chips mixed with shredded coconut – and I wasn’t about to go back to the store for plain chips.  They were extra delicious (made from Isa’s perfect recipe in VCIYCJ) and no one complained, and they were bought up in no time at all.  And yes, I did eat one. Or four.

Giving up coffee was awful, as most anyone who has ever detoxed from the stuff will tell you.  The first two days were actually ok, with me just feeling a little too smug about how easy it was.  Then, the headaches started, or rather, the headache started.  It lasted for about 8 days straight, and nothing really seemed to help ease the pain.  I was also a little bit (very) cranky on days 3 and 4, weepy-cranky actually, but then it was over.  I allowed myself all the tea I wanted, but psychologically it’s not the same deal at all.

The positives of this coffee-free existence were really surprising to me, mostly because I didn’t think that I was drinking enough for there to be a negative impact on my life.

1) More Energy : I found myself full of energy, more than usual.  There was no early-afternoon “I want a nap” feeling which really surprised me, and I actually found that I needed less sleep at night – about 30 minutes less.

2) Faster Recovery & Lower RHR : From a runner’s point of view, I’d always seen coffee as my friend, a silent partner in my training.  I’ve read a fair amount of literature on the matter and felt pretty good about my relationship with coffee, especially my pre-morning run cup.  Turns out, coffee wasn’t such a great friend after all (words I never though I’d type dear readers).  I didn’t make the connection initially, but my RHR (resting heart rate) seemed to be dropping though my training was increasing.  I initially and oh-so-modestly chalked that up to my being in rocking shape.  Then, I noticed that my training HRs were also slightly lower, and began paying even more attention.  It wasn’t until bringing coffee back into my life that I noticed my RHR sneaking up by about 8 bpm.

3) Better Concentration : After the detox stage, I found I was better able to concentrate on any/all things throughout the day.  The mental clarity that accompanied my coffee-free life was a real surprise, especially because I thought coffee actually helped improve concentration.

The negatives of giving up “Joe” were mostly social – everyone seems to get edgy call and even feel judged when faced with questioning their own habits.  The reactions of other people – friends and family members – reminded me of those I see when there are discussions of veganism in the air.  For most folks it’s not big deal, they just shrug their shoulders and move on to the next thing, but for others, there was a bit of defensiveness and disapproval and comments like “well, you can’t give everything up” start flying…

Yes, I did bring coffee back into my life, though I admit it was rather anti-climatic.  I had misty-eyed memories of cafination, the aroma, the “glow” if you will, of my morning cup, but in reality I found myself with an extremely elevated HR and feeling jittery.  I was also frustrated by the return of the afternoon sleepies and mental dullness that seem to accompany them in the early afternoon.  I’m drinking less, and though I do still love coffee, I think I’m much more careful about just how much I consume per day.

Have you ever given up coffee?

*That being said, I am looking for some part-time work kids, so if you need any translation, editorial writing or French/English lessons, do let me know, please?