Sometimes there are blogger food favourites that circulate tirelessly, popping up again, seemingly just taunting you with their deliciousness.

Enter “Katie’s Wingz” and “Crash Hot Potatoes“, two tasty items that I had yet to meet, culinaraily speaking.

Two very snappy women with unquestionable taste, Jessy and Guava, have been talking up (and eating up!) the crash hot potatoes for so long that I finally decided to stop fighting and make some myself. I am such a fan of the humble potato, being as it’s full of vitamin C and super-affordable and all. A food of the people. Let the proletariat eat their pomme de terre, apple of the earth, damn it.

But what to serve with my crashed spuds? I had about 220g firm tofu in the fridge (two soy yaourts, jar of tahini, mustard, apple juice…huh, better get shopping…). Katie’s Internationally-famous wingz are usually made with tempeh…ha! Forget convention, who says I need to use tempeh? No one, that’s who!

I pressed and fried the tofu crispy in some oil, and then just pretty much stuck to the recipe. I admit to playing with the spices, but that’s just normal after all. 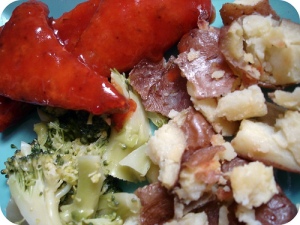 We were a very thrilled Fish Family, though I must claim ignorance as to the authenticity of the wingz. I have of course had chicken, but I’ve never ever had those ity bitty baby wing things people eat in bars or order in with their pizza. My first memory of seeing the marketing coup of wingz in play in my rural hometown was after I’d stopped eating animals, and this was a looong time ago. A Bush was in the Oval Office, and hey, there was also a war on Iraq…humm…funny how things change, yet stay the same.

Monsieur Fish, however, has had the wingyness, and he was smitten with the re-capturing of the saucy-spiciness and gave it two enthusiastic thumbs up!

I’ll have a 60-Day Project up-date for you next time, kids. You rule, and Mammafish is one happy chica.