This is one crazy Wednesday! I was even a little concerned that I wouldn’t get this W.I.P. post out today, but I was so excited to introduce this month’s featured Wipster, Amanda of Walking The Vegan Line, that I knew I had to get it together!

Amanda’s blog was one of the first I began reading regularly and so I’ve always felt a bit of an affinity towards her. If you’re not familiar with her blog, you need to head on over, because she’s a real inspiration. One of her many talents is what I like to call “fondant sculptrice” – she has a real knack for decorating cakes and cupcakes with fondant (a talent I need to work on as Guppy’s birthday is in a few weeks and I promised her a dino cake…). Take a look at these adorable cupcakes Amanda decorated : 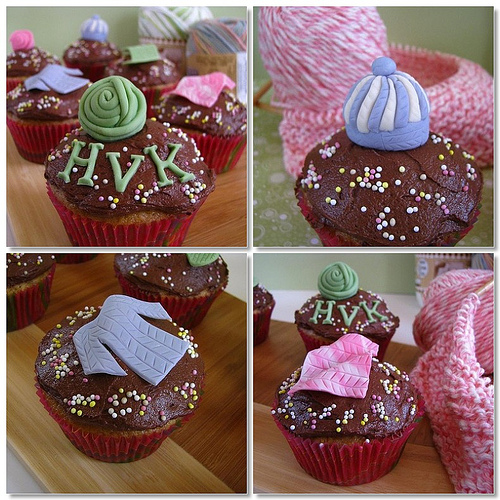 Amanda is also a talented knitter (the above cuppers were for the Huston Vegan Knitters Group) and seamstress. She has  wonderful Flickr sets documenting her cupcake and sewing adventures which you need to go check out post haste! But enough of my blathering on, here’s a little about Amanda, in her own words…

Craft-wise, I didn’t think I had a crafty bone in my body until around a year or two ago when I started doing some card making. That led to having my mom teach me how to knit while being cooped up without power after Hurricane Ike. Knitting just takes forever though and it was giving me ergonomic issues, so I took up sewing under the guidance of my Sew Crafty instructor Sarah and my mom. Now I’m hooked! I just bought my first dress pattern and I have grand visions of making my own wardrobe someday! Baking is also a craft of sorts for me… piping frosting and molding fondant are really an art. I’ve even started doing some special order baking here in Houston, with hopes of expanding more in the future if I can establish that there is a demand. I figure all of this crafting is a good way to get some bloodflow to the right side of my brain, since my day job tends to rely heavily on the analytical left side.

Random Facts:
1. I became a geologist because I love being outdoors… but ironically my job has me sitting at a computer 8 hours a day.
2. Brownies are my favorite dessert. When I was growing up, it was nearly a weekend ritual to make brownies with my mom or dad. Melting the chocolate was always the trickiest part… it always seemed to melt so s-l-o-w-l-y!
3. When I moved out of Texas for college, I took it upon myself to fill Coloradoans in on Texas trivia… like that Texas is the only state that can fly the state flag at the same level as the US flag (which unfortunately I’ve recently learned in not true, all states can). But we do have taller mountains that anything east of the Mississippi River!
4. I really want to get a koala tattoo, but my husband and friends think it’s a crazy idea. I even have a design all ready to go! (it would be my second, I also have a seashell tattoo)
5. For my final random fact… I asked for some help on twitter/facebook, and here are the suggestions I got: I am a vegan, I am a baker, and I know who killed JFK but I’m not telling who. So there you go.
Thanks, Amanda! And I totally vote for the tattoo!!!
Today was to be the March Stitch-Along round-up, among other things, but our lives have been turned a bit upside-down by a new addition to the Fish Family:

I’d like to introduce you to Cupcake (as named by Guppy), or Ben (as Monsieur Fish wants him to be named), our puppy.  He’s just a baby (we think 2 1/2 months, but he hasn’t seen the vet yet) and has pretty much taken over every second of free time I have since Tuesday morning. More on Cupcake soon, right now I just really need to try and get some rest. And wipe up pee. He is the epitome of a Work In Progress!
Have a crafty week, and don’t forget to see what the other Wipsters are up to, and to check out our W.I.P. Wednesday Flickr Pool, too. There are some really beautiful things up and it’s so fun to check them all out!