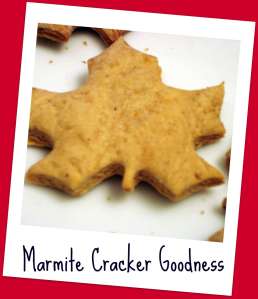 Like many of you, my first Marmite experience was rather brutal : I’d heard Marmite and Vegemite mentioned before here and there, but I had no idea what it tasted like. I was 16, and visiting England for the very first time.

Gullible, trusting and rather naive, I allowed myself to be seduced by the groans of pleasure coming from the 6 and 9-year-old children who were seated near me at the kitchen table, as the bit into their Marmite and cucumber topped slices of bread.

“So what does it taste like?” I asked, sniffing the open jar. The colour reminded me of the pints of Guinness I’d had the night before with the children’s uncle and cousin at the local pub. I was still marveling over the staying power of the foamy brew, the way the “S” the barkeep traced in frothy white top of my glass remained intact until I managed to finish it down. My head hurt too, but I was 16, who cares about that?

“Here, have some,” the elder of the two beamed, slathering a gigantic dollop of Marmite onto a slice of bread. “It’s kind of like peanut butter, only different,” he offered reassuringly.

I couldn’t help but notice the 6 year-old giggling, but she seemed to giggle all the time, so I wasn’t really sure what that was all about.

Of course I obligingly took a big bite of the tartine offered me, only to realize that I was about to be sick and needed to get to a toilet fast. Embarrassment. I was teased it was the Guinness from the night before. It wasn’t. It was that damned Marmite. Bugger.

I’m a peace and love kind of gal, and I’m always trying to make amends with my enemies. Like the yeasty-spreads. Thrilled I am to say that during Grad school one of my sweethearts had a real thing for the “mite” sandwiches, and I was all about people making me lunch, so I became a fan.

These crackers, however, take the love to a whole new level:

These biscuits are rich, buttery and have an almost eyebrow-raising bacony taste to them. The yeast spread gives them a depth of flavour that is satisfying and surprising. These are perfect for snacking, and would also be lovely dunked in a steamy bowl of soup. I served them with cocktails and billed them as crackers because here, biscuits are sweet and that would have been weird.

This recipe and 499 others will be available for your vegan pleasure in Celine & Joni’s 500 Vegan Recipes. You can check out the Flickr photos if you want more food p*rn, too. It’s a real treat to be working on such a comprehensive book. I’m not trying to be a tease, really! Come on over and I’ll make you some so you can have some, too. Promise.

*Another grand merci to Libby who sent me these super-cute cookie cutters. She was turned away at the polls during the 2001 election in Florida when that phoney election when down. She was there, man. Yet another moment in my day where I am thankful for Obama!