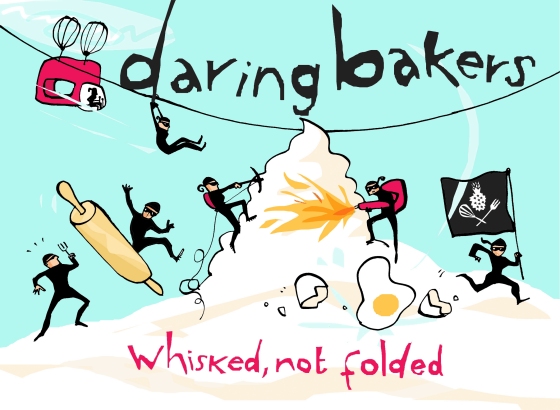 Unleash your sweet-tooth for this month’s Daring Bakers Challenge Cheesecake Pops from Sticky, Chewy, Messy, Gooey: Desserts For The Serious Sweet Tooth by Jill O’Connor. I’m warning you now, this is not in any way a healthy-avid-yoga-runner-wholefoods-type recipe…but it was indeed very tasty, sticky, messy & gooey to make (which always hightens the fun-factor if you ask me). 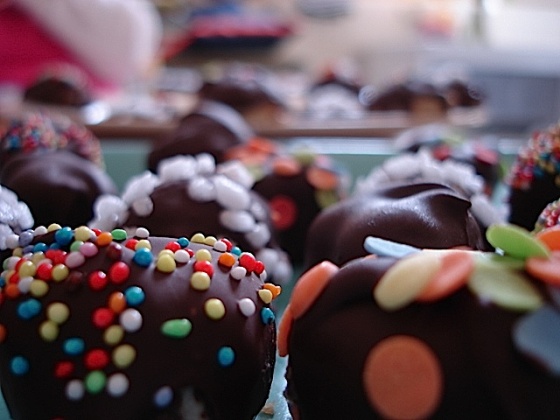 This month’s lovely challenge hosts Elle from Feeding My Enthusasims and Deborah from Taste and Tell found we Daring Bakers a very decadent treat indeed (thank you for your time & effort, ladies!) Cheesecake is in itself quite an indulgence, but for this recipe it’s only the beginning! After you’ve baked your cheesecake you then freeze & form it into various shapes and give them lollipop sticks, then coat in chocolate and decorate! Wow! Holy calories, Batgirl! That being said, because they are individually sized, you can easily control your portions, so that’s a good thing. I guess. If you’re into that sort of thing…controlling cheesecake consumption I mean… 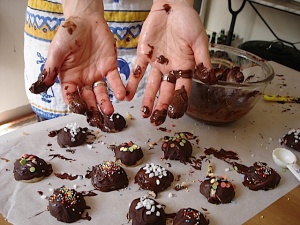 My favorite parts of this challenge were 1) completing the challenge with my super-cute mum who though battling a nasty nasty bout of illness played along and was available for planning consultations, official tasting & artistic direction (decorating) duty; and 2) the actual making of the tofu cheesecakes. I thought it was a blast! I totally admit to a heavy dose of finger-licking as well…see, these were indeed intended to be “pops”, but despite my best intentions (I visited two gourmet cooking shoppes & two super markets) I could not find anything that would work- I found popcicle sticks (too fat), super-thin straws (too flimsy), long, wooden sticks for cotton candy (too thick & long)… so I decided to turn this temporary set-back into a fun chance to use some new silicon molds that my mum brought me from the states! As a Daring Baker I was to follow certain guidelines, but using molds was ok’d by our hosts, so yeah for the molds! There were heart-shapes, disc-shapes, and flower-shapes, too!

Thing is, because there were no sticks to hold, I was hand-dipping them, which was a blast! Felt like a kid in the kitching doing something I could be scolded for! Another fun aspect of this month’s challenge was that a handful of the Daring Bakers Alternative Bakers got together to “chat” to exchange ideas & recipes & ideas, and that was a great chance to “meet” some new bakers & hear some ideas. 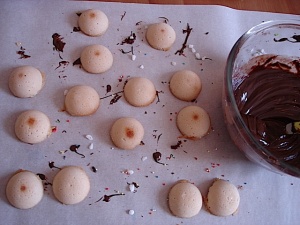 Here’s the recipe that I used (based on the tofu cheesecake recipe from The New Farm Cookbook (the original non-vegan Challenge recipe is at the bottom of this post if you want a peek!)

and for the chocolate coating:

I wiz everything in the blender or food processor till smooth (adding a little more juice if it’s a bit too stiff, normally it’s very smooth). If you were making a normal cheesecake, you just pour it into the crust & put it in the oven for about 50 minutes at 170c/335F. Because I opted for silicon molds this changed my normal baking time dramatically because the molds were of different shape & depth & made by different companies so the individual baking times varied from mold to mold (the shortest being 25mins, the longest 45). What I did then was to leave them in the moulds while they cooled (which I totally admit made my life easier than trying to scoop them out of a pan and shape them). 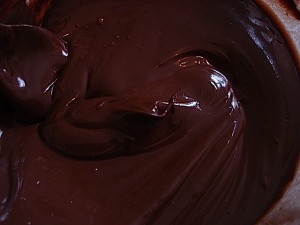 I’ll be honest- while the cheese cake was delicious, having it coated in chocolate just seemed too much for 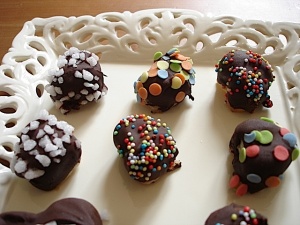 my family who seemed to just peel it off. It was, however, a very fun challenge, and I can’t wait to see what’s next!

1 pound chocolate, finely chopped – you can use all one kind or half and half of dark, milk, or white (Alternately, you can use 1 pound of flavored coatings, also known as summer coating, confectionary coating or wafer chocolate – candy supply stores carry colors, as well as the three kinds of chocolate.)

(Note: White chocolate is harder to use this way, but not impossible)

Position oven rack in the middle of the oven and preheat to 325 degrees F. Set some water to boil.

In a large bowl, beat together the cream cheese, sugar, flour, and salt until smooth. If using a mixer, mix on low speed. Add the whole eggs and the egg yolks, one at a time, beating well (but still at low speed) after each addition. Beat in the vanilla and cream.

Grease a 10-inch cake pan (not a springform pan), and pour the batter into the cake pan. Place the pan in a larger roasting pan. Fill the roasting pan with the boiling water until it reaches halfway up the sides of the cake pan. Bake until the cheesecake is firm and slightly golden on top, 35 to 45 minutes.

Remove the cheesecake from the water bath and cool to room temperature. Cover the cheesecake with plastic wrap and refrigerate until very cold, at least 3 hours or up to overnight.

When the cheesecake is cold and very firm, scoop the cheesecake into 2-ounce balls and place on a parchment paper-lined baking sheet. Carefully insert a lollipop stick into each cheesecake ball. Freeze the cheesecake pops, uncovered, until very hard, at least 1 – 2 hours.

Alternately, you can microwave the same amount of chocolate coating pieces on high at 30 second intervals, stirring until smooth.

Refrigerate the pops for up to 24 hours, until ready to serve.